Traffic pollution is known to have a greater impact in urban areas where vehicle congestion and the resulting exhaust emissions from motor vehicles are high. In these areas where street canyons exist (buildings flanking the sides of a street), air pollution can be effectively trapped leading to high-risk exposure for these densely populated and trafficked areas.

Shairstreet is the roadway component model of the Shair air quality modeling system that provides near-realtime high-resolution mapping (sub 10m scale) of traffic concentrations in urban areas. Those reading who live in cities, know that the level of traffic congestion can vary dramatically block to block. Shairstreet can model air pollution from vehicles at a sub-block level — letting you know where the air is the cleanest. 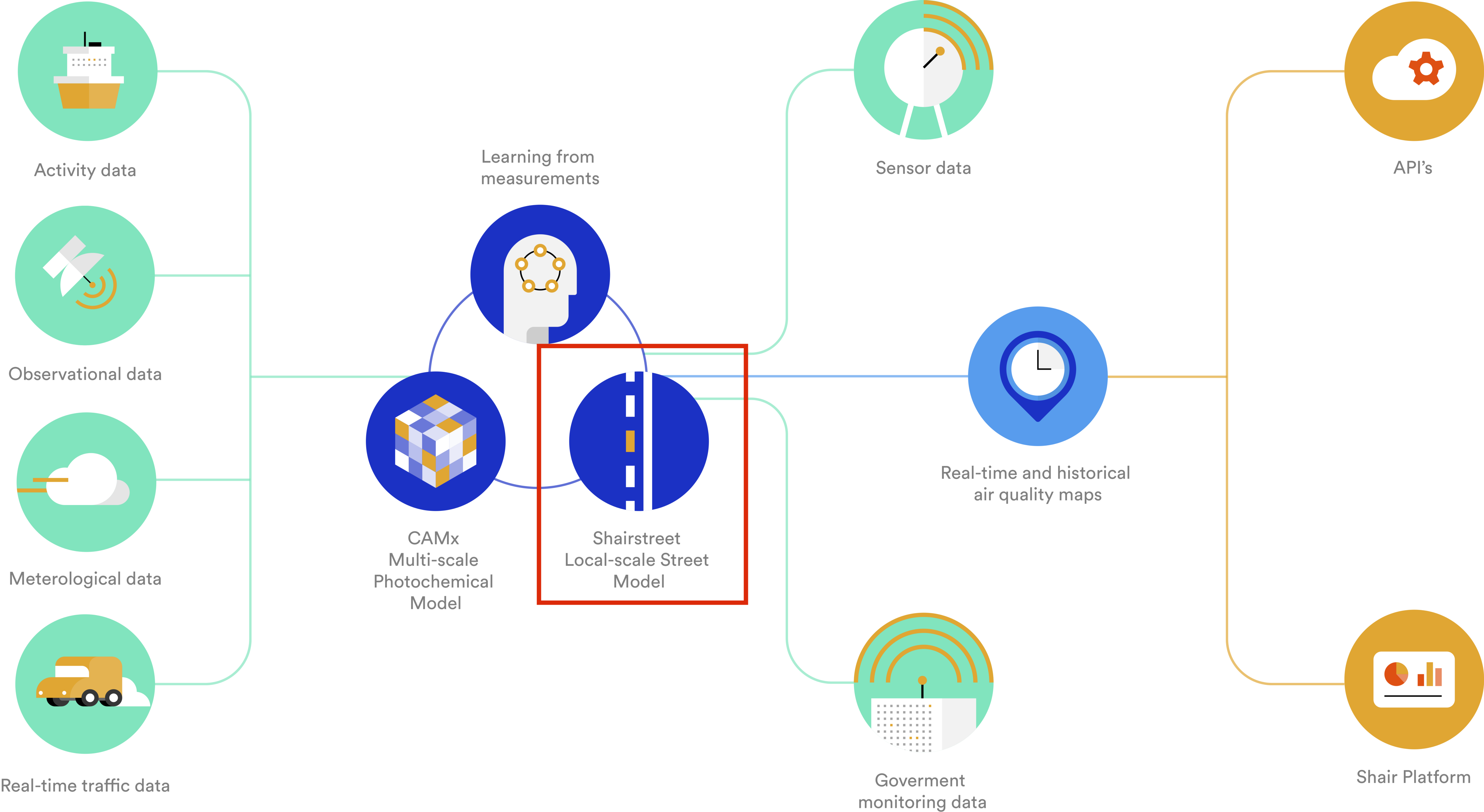 The Shair modeling system showing where in the architecture Shairstreet is located.

Shairstreet calculates the concentrations of traffic related pollutants, such as PM₂.₅ and NO₂, from our realtime traffic emissions model, taking into account traffic congestion, vehicle speed, meteorology and building effects.

The figure below shows how exposure to pollution can be increased in a street canyon when the wind above the building level is flowing perpendicular to the direction of travel. Under the condition such as this one, a wind vortex can be created in the canyon called the recirculation vortex. The recirculation vortex enhances the pollutant concentration at the street level, on the windward side, since the pollution cannot disperse as freely compared to the case if there were no barriers present on either side. Shairstreet models the recirculation cell in street canyons to accurately capture situations when pollution is the worst in urban areas.

Illustration of vehicle emissions in a street canyon and the recirculation vortex that can be created when the wind above the buildings is flowing perpendicular to the street.

The speed of the vehicles traveling in a street canyon also affects the level of pollution. Cars and trucks that are moving very fast generate large turbulence near the ground level which helps disperse the pollutants vertically making the air cleaner than if it was a traffic jam. Shairstreet uses Shair’s realtime traffic flow and fleet distribution (cars vs. trucks) estimates to model the effect of dynamic traffic for street-level pollution.

Accounting for all the buildings

As described above, the complex building geometries found in urban areas is very important to our understanding of hyper-local air quality. Shairstreet uses information of building heights to classify modeled street sections as street canyons. The general rule is that the average building height to street width ratio must be greater than 0.2 for the street section to be classified as a street canyon.

Below is an example of our work in the City of Richmond, CA where lidar data was spatially merged with building footprint data to obtain a 3D building database for the city. Wind speed and direction are calculated at the top of every street canyon road segment. Lidar data is not prerequisite for Shairstreet modeling, as other methods can be used to obtain building heights for urban areas. 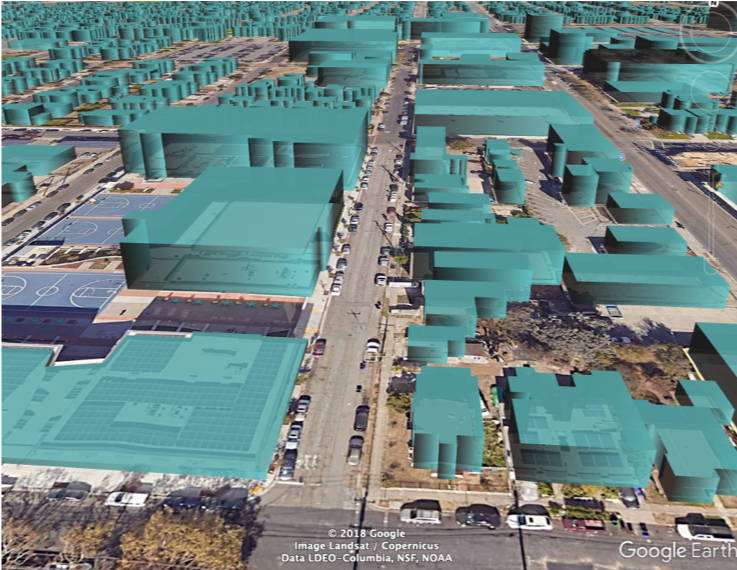 An example of building geometry input that is used in Shairstreet from Richmond, CA.

Dispersion away from roadways

The prevalent method for modeling road line sources breaks the street link into infinitesimally small chunks, so that each one can be modeled effectively as a point source. This is because there is an exact analytical (mathematical) solution for Gaussian dispersion from a point source. Such a method, however would not allow Shairstreet to model millions of road links frequently, since it is computationally very slow.

Instead of breaking a road segment into infinitesimally small point sources, Shairstreet can use only the start and end points of each road link in order to approximate Gaussian dispersion away from the roadway line source. This is possible since the road links Shairstreet models are relatively short in length, typically less than 50 meters. The advantage is that the calculations are very fast, as each road link is computationally effectively only a single point source instead of hundreds or thousands.

The figure here shows an example of Shairstreet raw model output for PM₂.₅ in Richmond, CA at 10x10m resolution. You can see the major highways lighting up the map. Over 100,000 roadway links were modeled in this area.

How is traffic contributing to air pollution in my neighborhood?

With Shairstreet, you can unlock the level of pollution that is due to traffic, and know which streets are the cleanest to bike commute or walk down in realtime. Maps such as the one below provides insight into the air quality at a high resolution. 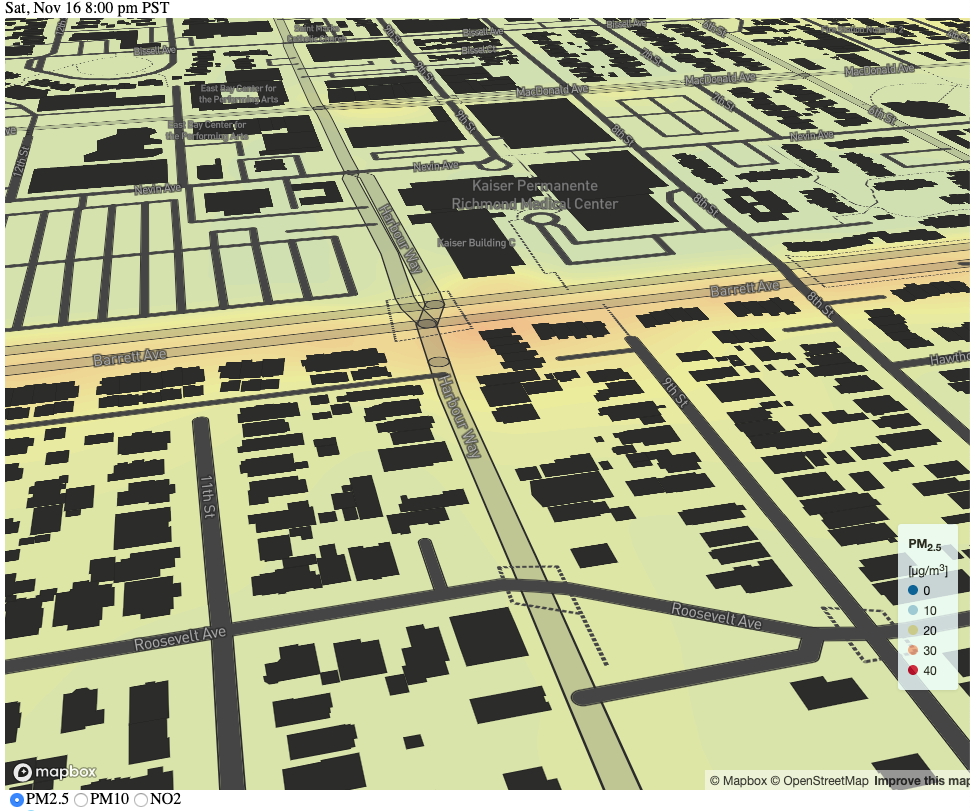